You are here: Home1 / Featured2 / Choosing the right spot: Where to position your Radiator

Choosing the right spot: Where to position your Radiator

Should you have a radiator installed in your lounge area, it will probably be situated underneath the window on an exterior wall.

And if you are considering upgrading your home heating, you’ll likely assume it must replace the existing radiator in the exact same spot.

That isn’t the case at all, though…

Whilst radiators have tended to be fit in this location for several years, the advanced technological elements of modern home heating have negated some traditional limitations. And these will surely have influenced the positioning of your radiators in the past.

Now supplied in an extensive array of wacky shapes and sizes, the designer radiators of today can be installed in a variety of areas. The likes of internal walls and alcoves are included amongst them.

As such, those purchasing new radiators can maximize limited wall space whilst creating a standout focal point.

However, although it is no longer a requirement to fit your radiator beneath the window, it could be considered a logical move to do so.

Radiators have historically been positioned in the coldest part of the room. That’s the exterior wall – where cold air enters and descends to the floor.

Back before double glazing was a common household feature, radiators positioned as such helped to combat cold draughts entering via the window.

Double glazing is now a standard feature in most properties though. So there is greater scope to place designer radiators pretty much anywhere we desire.

But to guarantee an optimal performance from your radiator and the best heat output possible, there are several vital factors to consider. 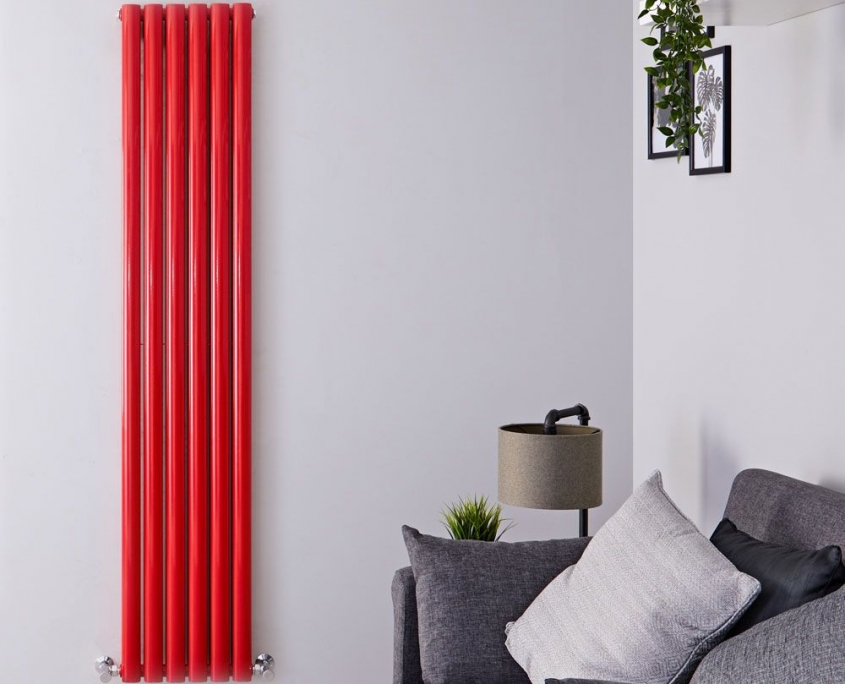 Locate away from Furniture

Try your best to locate your radiator away from large furniture items, like cabinets or the sofa. Ignoring this advice will halt the flow of hot air around the room. Also keep the radiator’s surrounding space free from clutter to allow for the easy transmission of heat throughout the room.

Full-length drapes can conceal radiators that are positioned underneath a window. They trap the heat and restrict it from filling the room. In a similar fashion, mid-length drapes can stem the heat output of convector radiators which emit air from the top. If possible, position your radiator a comfortable distance from upholstery and drapes. This will ensure it can operate to full effect.

Can a Radiator be installed behind a door?

In certain cases, especially in smaller rooms, installing a radiator behind a door might be the only conceivable option. As convection assists in moving heat around the room, placing a radiator in this location shouldn’t pose any issues.

The temperature of the area connected by the door can influence whether this is an appropriate solution, however. For instance, if the door opens out to a typically cold hallway, the heat will head straight for the colder space. So you’ll be left with no heat in the room you were actually trying to warm up when the door is open.

And as obvious as it migyht be, you need to ensure there is enough room to properly open the door with the radiator positioned immediately behind it. Particularly in family households where smaller children might be present. You could definitely live without a scratch or a dent in your brand new radiator!

Don’t be a slave to plumbing and pipework

If your existing plumbing and pipework is appropriately positioned for your next radiator installation, brilliant. But if you do fancy a change, don’t be a slave to your existing fittings. By adjusting the location of your pipework, you could completely open up the room. You can free up valuable floor and wall space, and create more options for a designer radiator installation.

Select a style to match the space

In areas such as kitchens, where the likes of worktops and units can dominate the space, vertical radiators will often prove an ideal option. In opting for a style that matches kitchen decor, you can also improve the overall appearance of the room.

For a classic, farmhouse-style kitchen, traditional radiators are well worth considering. Or, for more modern kitchen areas, you could do much worse than choosing from our anthracite radiator collection to add to an ultra-contemporary flavor.

Our Buyer’s Guide to Kitchen Heating offers a more in-depth look at the different options available for this specific space. 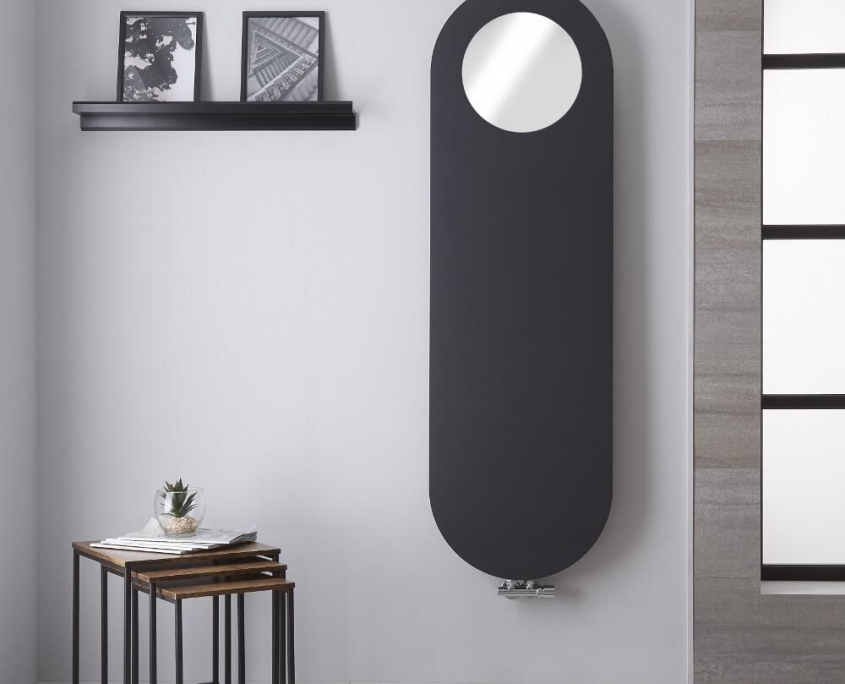 Is a Low Profile Radiator the right choice?

For the likes of conservatories or out-houses with low windows and little space, a low-profile radiator might prove the right choice. They’re ideal for delivering a luxurious touch to a space, and provide an excellent heat output comparative with their diminutive size.

Alternatively, you could select from an impressive choice of towel warmers to add a similarly strong heat output from a relatively small heating component. Our Ultimate Guide to Towel Warmers provides a better insight into the virtues of several different designs.

Is a Hydronic Heating option worth considering?

If you’re upgrading your bathroom heating, then a hydronic heated towel rack could be a superb option, especially in a compact space. It is sure to create a warm and inviting ambience in the area, as well as offering a useful means to keep towels toasty warm and dry.

It is vital to position this correctly. Place the towel warmer as near as possible to the shower system or freestanding bathtub, so towels are easily accessible. 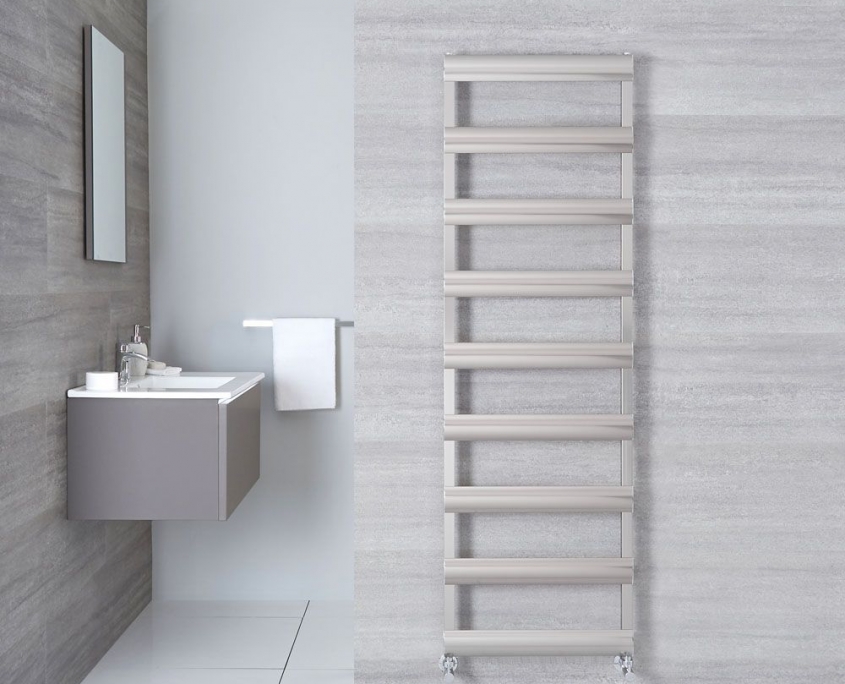 What about Convector Radiators?

Convector radiators are far and away the best option in certain specific circumstances. Namely, if space restrictions force you to position your radiator immediately behind furniture. This is because convector radiators will emit heat from the top. Contrastingly, panel designs would send heat straight into the sofa or furniture they are installed behind.

Should you have limited placement options, or decide to position your radiator on an exterior wall yourself, you need to make sure the wall is well insulated. You can do so in a cheap and convenient fashion so your budget isn’t strained unnecessarily.

You just need a foil-faced sheet of expanded polystyrene lining. Place it behind the radiator in order to reflect the heat back into the room, rather than risk it being lost via the outside wall. 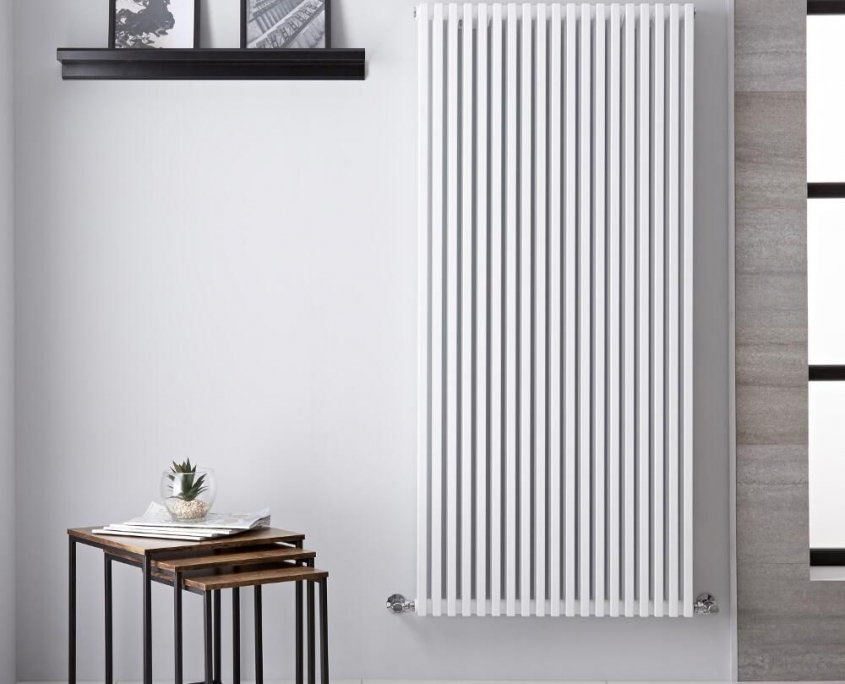 Electric wall radiators are certainly an appealing proposition, given that they don’t require central heating to function. As a result, you can be a lot more flexible with regards to positioning.

And with so many stylish designs now on the market, there’s a wide variety of stunning models that can enhance any home. In assessing whereabouts to place an electric radiator or electric towel warmer, it is a good idea to initially identify the rooms with fluctuating temperatures.

For instance, the kitchen will heat up when the oven is switched on. So installing an electric wall radiator in the kitchen is a great idea. It can be switched off while the central heating remains on to keep the rest of the home at a comfortable temperature.

Similar sentiments apply to the bathroom. On a warm summer day, you probably won’t want to switch your central heating on, yet will wish to keep your towels toasty warm and dry. In that case, an electric heated towel rack is ideal.

The location of the mains electricity supply will obviously dictate where your electric radiator can be positioned to some degree. Should you opt for a plug-in electric radiator, that component can be hung wherever a plug socket is present. In this instance, it’s an easy enough installation job to complete. But if the radiators are to be hardwired into the mains, we would strongly recommend enlisting the services of a professional electrician.

Hopefully, our advice on radiator positioning has left you feeling confident to explore a range of installation options. Of course, you need your new radiator to do so. And as biased as we may be, there surely isn’t a better place to shop radiators online than with Hudson Reed USA.

We offer an extensive selection of vertical and horizontal radiators in both modern and traditional designs, so have models fit to enhance any space large or small. Radiator valves and accessories are also available to complete the look and functionality of your chosen component.

Order online today, or for more help and advice in selecting the right radiator, don’t hesitate to contact us via our website. Alternatively, you can call our friendly team on 1-877-778-8460 if you would prefer. Happy radiator shopping!

Vertical or Horizontal: The Best Radiators for your Home